The interaction cross-section can vary strongly depending on the element being probed. In general, you need to consider the coupling strength between the probe and sample as well as the probability of decay into the detected property.

Coupling of high energy (60 – 300 keV) electrons with core electrons – Here the interaction varies with the core electron energy in the sample, number of core electrons and the number of empty states available to scatter to. In general, lower energy excitations are more probable. In some cases, a large, narrow set of empty state are available giving a resonance effect. For electron energy loss spectroscopy (EELS), the incident electron is the detected electron so this coupling is the only process you need to consider. 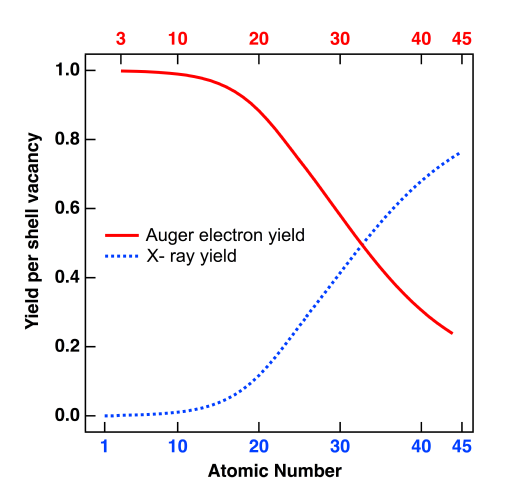 The sample thickness will influence the sensitivity of the measurement. For very thin samples, the total intensity emitted will be low, thereby limiting the detection limit. As sample thickness increases, the background associated with all other processes will increase, limiting the signal-to-background ratio (SBR). This effect typically results in a maximum in the measurement's signal-to-noise ratio (SNR) vs. sample thickness; the SNR is the relevant metric. For EELS measurements, the signal is strong even to near zero thickness, but the background rises rapidly with the thickness. In addition, multiple scattering of the electrons will spread the EELS core-loss signal to higher energies, thus reduce the SBR further. The net effect is a peak in the SNR of the EELS signal at moderate thicknesses, then a fall off beyond that. EDS data background rises slowly and generally the spectrum SNR continues to rise with thickness. Multiple scattering in this context reduces the lateral resolution of the probe and the MDM falls as the probe broadens.

The Auger and x-ray photoelectron spectroscopy (XPS) signal only originates from the (near) sample surface, so sample thickness does not have the same meaning.

Want to enhance your EELS results?

Access applications experts who are ready to help solve your EELS issue.